Millie Bobby Brown is a British actress. She gained recognition for playing the character Eleven in the Netflix sci-fi drama series Stranger Things, which earned her two Emmy Award nominations for Outstanding Supporting Actress in a Drama Series and two Screen Actors Guild Award nominations for Outstanding Performance by a Female Actor in a Drama Series. Brown is one of the youngest nominees for the award. In 2018, Brown was featured in the Time 100 list of the world’s most influential people and was appointed as a UNICEF Goodwill Ambassador, the then youngest person selected for this position. 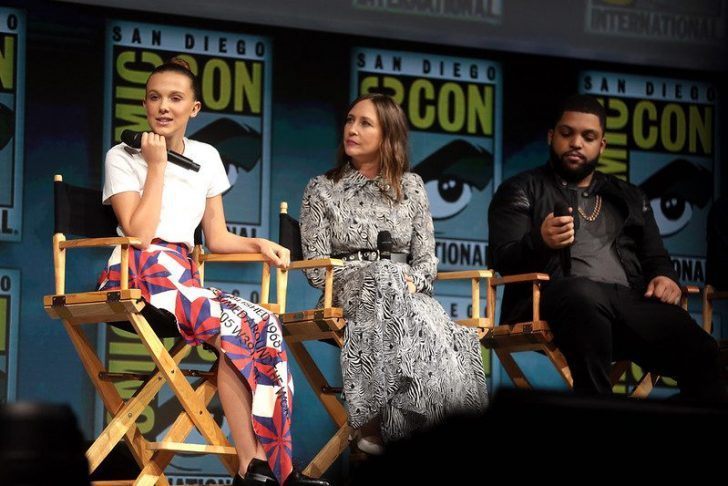 On Friday night, Millie Bobby Brown had the TV show debut of her new blonde hair, wearing it with a monochromatic purple look on The Tonight Show Starring Jimmy Fallon. The outfit had a real classic glamour to it, with a few modern twists. Her off-the-shoulder top was trimmed with violet feathers and a few sparkles. The shirt had long bell sleeves and was form-fitting around her torso, connecting with a pair of skin-tight pants in lavender. Both pieces are by RaisaVanessa. The pants were high-waisted with a sheen to the material that caught the light, and she made her legs look even longer with a pair of black platform heels. 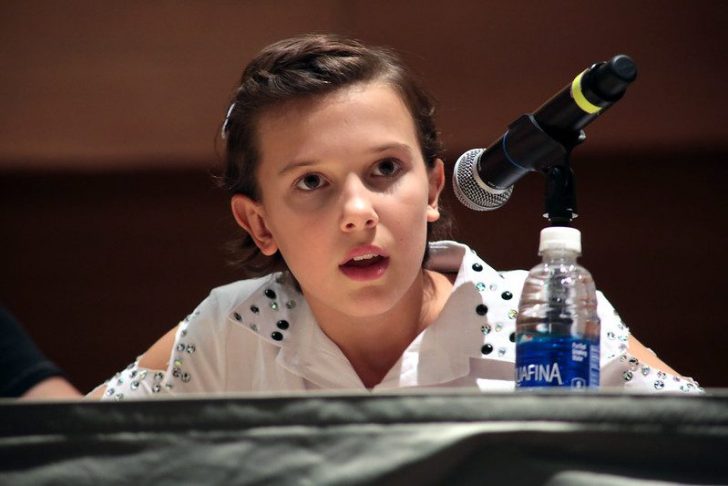 These red carpet moments are an opportunity for the blossoming Hollywood star to experiment with fashion in her quest to find her own unique way, and she’s embraced feminine, fun and sophisticated looks by labels like Calvin Klein, Rodarte, and Oscar de la Renta. Millie started off with a short silver dress with an illusion neckline by Jenny Packham when she attended the 2017 Golden Globe, right after her 13th birthday. The dress was paired with matching sandals by Sophia Webster.

The same year Eleven actress started to express more of her fashionista side and chose a fun, unconventional look for the VMA’s. She wore a black tulle dress with ruffles and metallic polka dots by Rodarte and patent leather combat boots by Stuart Weitzman.

But when she really caught fashion followers’ attention was when she went to the Emmy Awards in this Calvin Klein By Appointment dress that echoed the Dior New Look of the 1950s with its strapless design accented with a ribbon belt that gave it a perfect youthful touch. Over the years, the actress showed her dreamier side with overflowing dresses with her quite apparent love for ruffles and bows trailing behind her, paired with matching pumps or block heels. 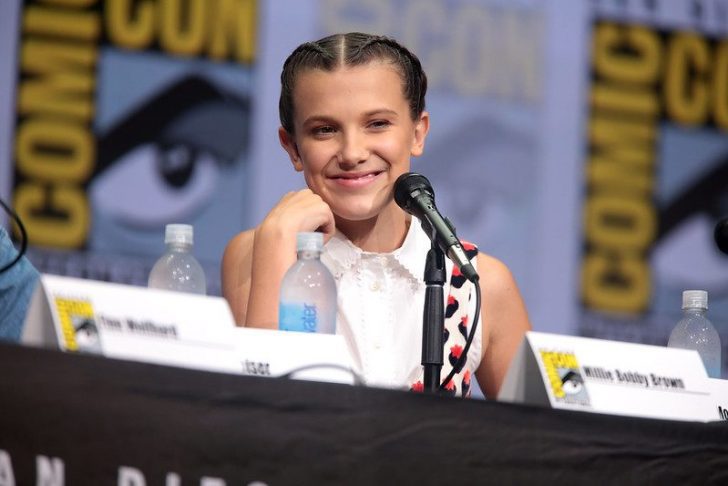 At the 2020 Screen Actors Guild Awards L.A., the teenager fully embraced the sophisticated vintage style with this white Louis Vuitton coatdress worn over cigarette pants and accessorized with ankle strap pumps. The frosting on the look was a set of gorgeous diamonds from Cartier.

After her interview, Brown was seen in more casual going out clothes for a date with boyfriend Jake Bongiovi, who took her to dinner at the Italian restaurant, Don Angie. The couple were smiling and laughing as they walked through the New York City drizzle. Bongiovi is the son of Jon Bon Jovi, and they have been romantically connected since last summer.